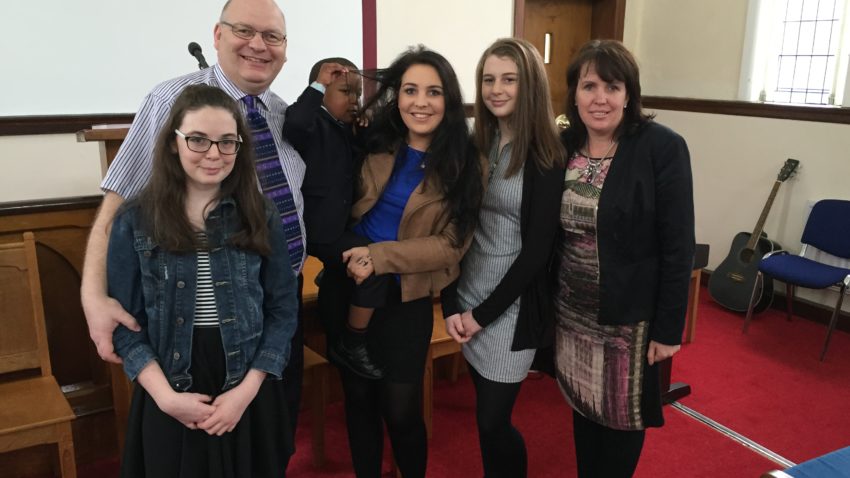 I was born into a godly and Christian home where both my parents loved the Lord and were actively involved in Ballykeel Baptist Church. However it wasn’t until I was away on a Baptist Youth summer camp in Portrush that I was challenged by one of the leaders on whether I knew for sure if I would go to heaven. I initially said ‘yes’ to him but that evening as I tried to sleep I came under conviction of both my lie and concern for my future destination. So it was there on the 12th July 1979 that I received the Lord Jesus Christ as my personal saviour.
I remained active in my church in the youth groups and Bible studies and was baptised in my late teens and then joined the membership of Ballykeel Baptist. Whilst at university my aunt returned from South Africa on furlough and she challenged some of the young people to give up their holidays and go help in that country. So in July 1990 I headed off with two others from our church to help in Christian schools in Johannesburg. I was supposed to spend two months there but ended up staying six months! On leaving I was sad to be departing the work among the kids but had no desire to return to the country. However in the next year the Lord began to work in my heart, challenged me from the Scriptures and finally I surrendered to a call to return to South Africa and in December 1991 I was commissioned and sent out from my home church.
The work that I was involved in initially was teaching in several Christian schools and doing evangelism in the homes of many of the parents who came from the African townships near Johannesburg. In September 1995 the Lord led us to Grace Baptist Church where they asked me to help out with the pastoral duties and I remained as their pastor till May 2013. As well as the church responsibilities we ran a Christian School of 180 children, organised feeding schemes and set up a Bible College where we trained and sent out 7 South African men to plant other churches.
The Lord has blessed me with my wife Michelle, and we have three girls – Miriam (aged 21), Rachel (16) and Cherith (14). We also adopted two little boys – Sam who had a heart defect and he died after just 1 month with us, and Gideon who is aged 5.
Since returning to Northern Ireland at the end of 2013, I was kept busy with preaching engagements – however it was a great privilege to have been entrusted with the Pastorate at Killicomaine Baptist Church in January 2016.